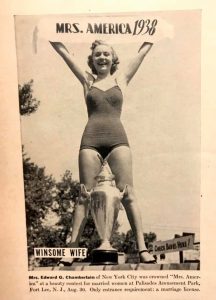 The first Mrs America, was featured in the September 12, 1938 issue of LIFE Magazine. The pageant was held to promote the Palisades Amusement Park in New Jersey. Margaret modeled for department stores. She won her first beauty pageant at the Cleveland Fair a few years earlier. The only entry requirement was a marriage license.