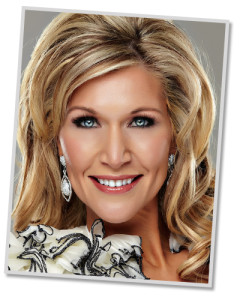 In 2006, Karalyn’s quest to become Mrs. Nebraska began and she placed 2nd runner-up.  Giving up was not an option, so she competed again in 2008 placing as 1st runner up. After taking a year off, the transformation continued and in 2010 Karalyn was chosen 1st runner up once again. Knowing that she had “unfinished business” and with much support from her family and friends, in 2011 her journey to capture the crown became a reality and she won the Mrs. Nebraska America 2011 title. Women who possess these qualities are great role models, not only for their own daughters, but for others as well. Karalyn didn’t ever see herself as a loser as others tend to do when they do not win the Mrs. Nebraska title the first, second and even fourth time. She evaluated each experience as a learning tool and came back the next year more equipped and even more confident until the timing was right for her. “I had learned so much about myself and what I was capable of…as someone once said, the definition of success is falling down 7 times and getting up 8!”

“Being Mrs. Nebraska 2011 was an incredible opportunity and an amazing lifetime experience.  I could not have done it without the amazing support of my family and friends. What an incredible year!”   Once Karalyn was crowned the whirlwind of activity began. She only had 3 weeks from the night she was crowned before she left for Nationals.  Mrs. America was held at the incredible Greenbriar resort in West Virginia and the contestants spent 2 weeks there rehearsing and prepping for the big event.  The Mrs. America Pageant aired on national TV on Mother’s Day drawing over 160 million viewers.  Karalyn placed as a top 15 finalist. “I have made incredible lifelong friends throughout the United States. “

Karalyn is currently the State Director of the Miss Nebraska & Miss Iowa Jr. High/High School/Collegiate America Pageant.  This is a fairly new pageant system that was founded 7 years ago by her 2011 Mrs. America sister Amanda Patterson from Arkansas.  Aside from all the glitz and glamour, Karalyn’s career is an Associate Broker with Woods Bros. Realty.  She serves on the Board of Directors for the Realtors Association of Lincoln, and is the President Elect for the Nebraska Certified Residential Specialist (CRS)  Chapter. She has repeatedly been named to the Top 25 Wood Bros list for being Best of the Best. Karalyn was also named as “Best Dressed” in 2012 by Lincoln’s Strictly Business Magazine.

In her spare time, Karalyn continues to volunteer for numerous organizations. Her hobbies include traveling, reading and relaxing! She and Brian have two grown daughters.

“My journey to Mrs. Nebraska was a little longer than most…throughout it all I had the unending support of my incredible family and friends.  Their encouragement, love and support gave me the courage to try again-to listen to my heart.  I have always believed that God’s timing is perfect and I trusted that He had a plan.  Being Mrs. Nebraska 2011 was exactly what he had planned for me.  The people I have met, the experiences that I have had, have all been worth the wait!”