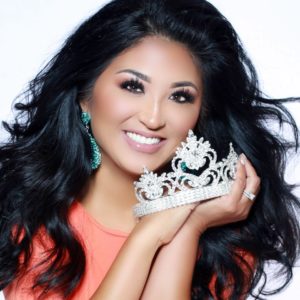 Anna, age 49, calls Omaha her home. Raised as a military brat, she lived in several states and even in Germany and South Korea. She says Omaha is her home because she’s planted roots here for most of her life. She has been married to Robert for 21 years and they have one daughter, Hannah.  She is an ESL middle school teacher with Omaha Public Schools as well as an adjunct professor with College of Saint Mary in their Master of Arts in Teaching program. Finishing up her 21st year, she says teaching is her passion and she wouldn’t want to do anything else. She keeps busy with many volunteer activities throughout her community. She enjoys reading, cooking Korean food, traveling and trying new things.

Her platform surrounds a special organization called FITGirl, Inc. and it is very near and dear to her heart. The organization started 2 ½ years ago by her friend and Anna didn’t hesitate to jump in. When asked about FITGirl, she responds by saying, “It’s an amazing non-profit organization that empowers young girls with the tools they’ll need to lead a healthy and active lifestyle.” She’s also very passionate about sharing her love for working with ESL students. Her students come from all over the world and she says the commonality they share is they all want to lead a better life and be afforded endless opportunities.

Anna can’t wait to share her story of never giving up, her motto for running in Mrs. Nebraska. “After running many times and not winning, I was very discouraged. But then I realized you can’t fail UNLESS you give up. Six months ago, I decided to give it my all and just go for it. My advice to anyone that wants something really badly is to NEVER GIVE UP. Go for your dreams…it’s a magical feeling like no other when it comes true.”